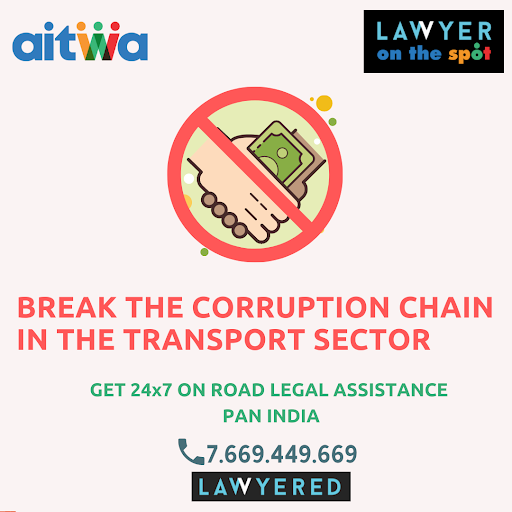 For the past two decades, India's economic development has been spectacular. Considering that the Indian roadways handle three-quarters of all freight traffic, transportation is critical. The Indian government has made significant efforts to change the business climate and improve the ease of doing business in India. However, the on-the-ground scenario cannot be glossed over, that displays transportation as one of the sectors that is most prone to corruption. The act of corruption in the transport sector is frequent and reaches top level government officials. Corruption in the transport sector leads to major economic impacts. Thus, corruption causes large scale diseconomies and its impacts are malign to the nation.

The ugly truth of corruption is that once it takes root, it spreads across the whole system. There have been several claims of corruption in the transportation sector, such as inducements to officials for various reasons 一 secure driving licences without training and testing,  facilitate the passage of overloaded trucks or those without valid fitness certificates, avoiding a fine for a driving violation, or even to circumvent intimidating situations, instances of corruption in the transportation sector are in vogue. Assorted acts of corruption are catered for due to lack of enough resources to stop them, as well as administrative practices that encourage such inappropriate acts just to satisfy their own greed. People seeking to transfer commodities are frequently involved in organised crime, and there is corruption even at the enforcement level in the transportation business.

As the number of trucks in the country grows year after year, the amount of unaccounted money that does not reach the government grows from a few crores to thousands of crores. Corrupt officials in the concerned department profit from the loss to the government treasury. With this sector's significant development, corruption has increased at a nearly comparable rate. Truckers are required to pay bribes throughout every level of their frietage. The amount of corruption in this business cannot be precisely evaluated due to the industry's unorganised character.

Starting with the lengthy documentation work like getting a permit or its renewal and other related issues involved with the purchase of a new vehicle in the offices of the transport department to moving the vehicle on the road, at each step the owner is forced to shell out money to get his work done. No surprise, if somebody refuses to pay; they are compelled to make repeated visits on one excuse or the other.

The government should investigate the possibility of establishing a single inspection force at interstate checkpoints to issue no-objection certificates (NOC) on behalf of all departments, including transportation, police, sales tax, octroi, and other similar agencies, which are currently authorised to stop and investigate any transporter. The use of a single-window clearance would not only minimise the amount of money lost due to downtime, but it will also cut the amount of time spent physically interacting with several department authorities.

Agents and middlemen are active not just in department offices, but also on the highways. According to various reports, en-route squads are frequently not from the department, but rather are 'assigned' to collect money from truck drivers. This can be mitigated by reducing the number of checkpoints. The inspection team should keep a complete record of the vehicles they stop and inspect. The issuance of a receipt in exchange for a fine or a NOC will aid in the reduction of frequent stoppages.

Transport via e-truck the computerization of transportation agencies and their interconnection across the country will make records more standard and accessible. This will also assist to cut down on the amount of time spent at certain places. Computerized checkpoints are intended to enhance vehicle verification and truck load carrying operations. The use of electronic weighbridges and computers to estimate penalties reduces the manual discretion of applying fines, creating difficulty and aggravation to the transporters. Minimal paperwork & documentation should be encouraged at the transport department offices, with access to all papers and prior records of the relevant vehicle and its operator on computer.

If a few individuals are entrusted with authority or knowledge that is beneficial to another entity that isn't beyond breaching the rules, corruption is likely to emerge. That entity can pay to obtain the decision, permission or approvals, or information it requires in order to make a more significant profit in the near future. The corrupt entity triumphs; the agent celebrates leaving the wider populace to suffer. 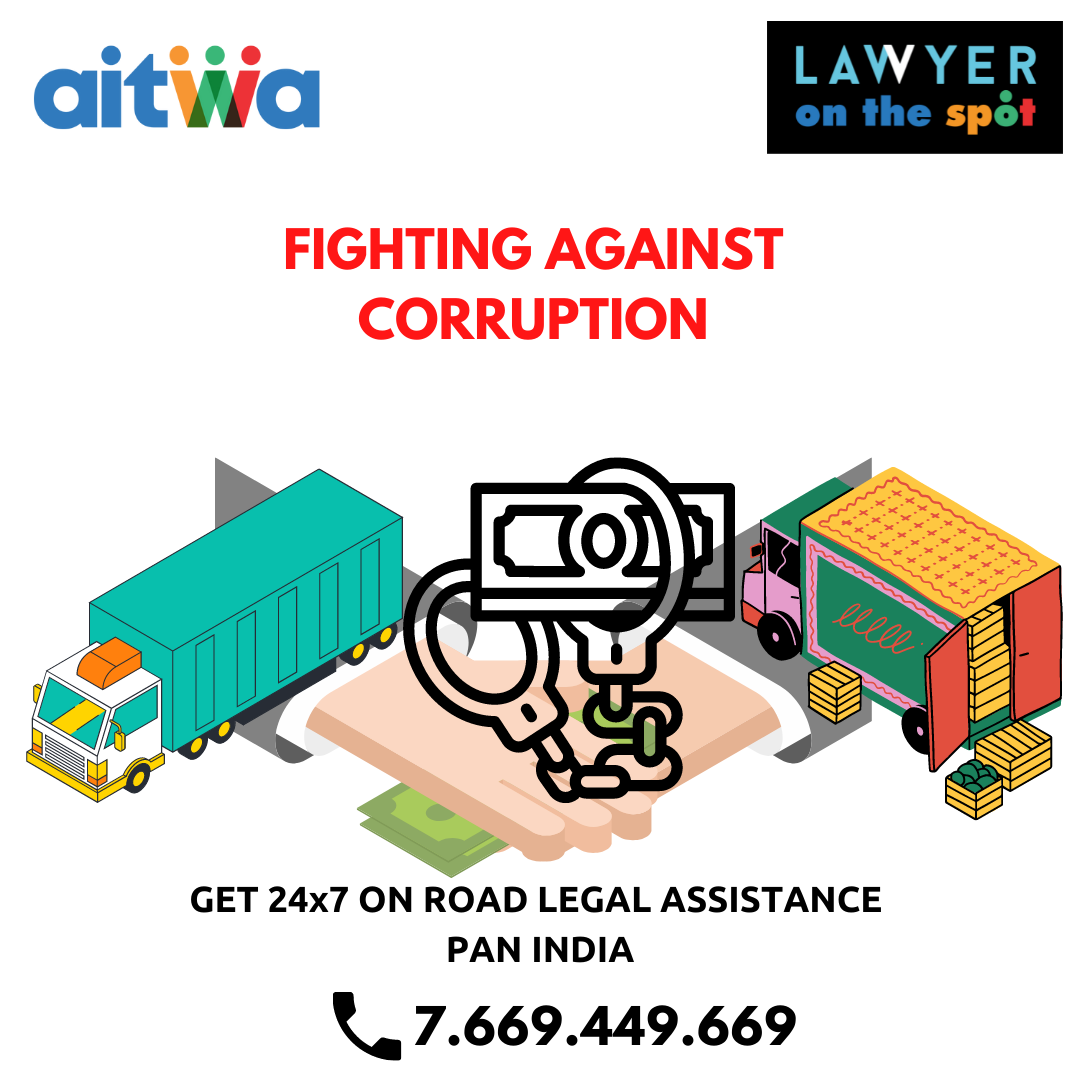 To hardwire the above principles, ''Lawyer on-the-Spot'' (LotS) manifests itself with the aim of welfare of India’s road transport fraternity at the core. Launched by the foremost apex body of India's Road Transport Sector, AITWA (All India Transporters Welfare Association) to constantly work to improve and handle the potential pitfalls of the transporters. Transport and logistics are not an easy task and we are here to help you out.

LotS is an initiative to promote trust in society and address major problems across India with its dedicated service in  providing quality assurance, guidance, and 24-hour legal aid to transporters in need. 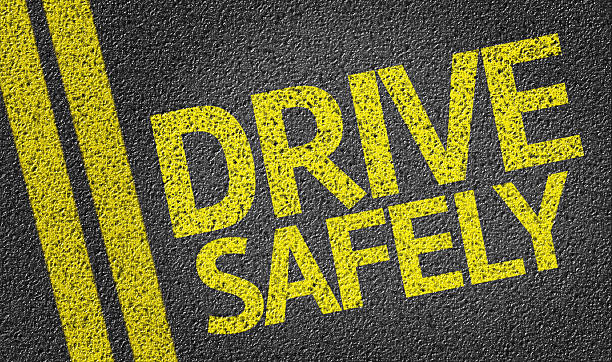 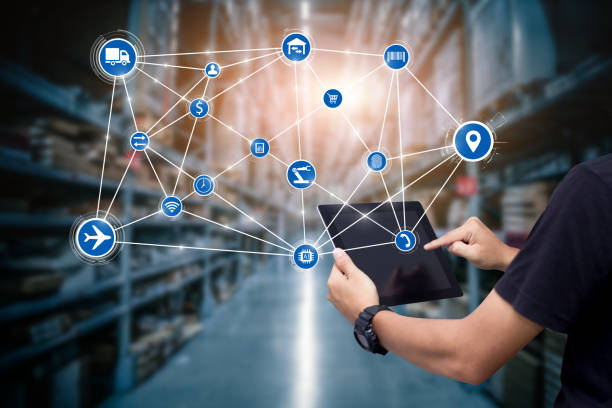 Taking our commitment forward we have built a solution for your needs.